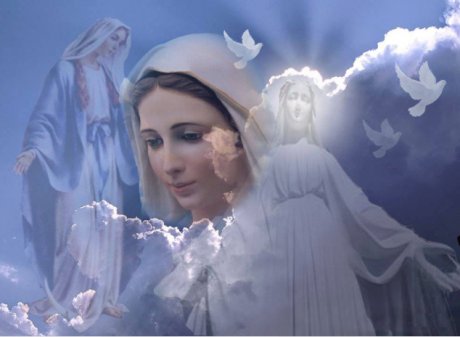 From the Gospel, John 2:3, during the wedding feast in Cana of Galilee, the wine ran short and Mary says to Jesus “They have no wine.” Mary then tells the servants, “Do whatever he tells you.” Mary is at the center of this scene and facilitates the first miracle of Christ turning water into wine that results in the disciples believing in Christ as the Messiah and the beginning of Christ’s ministry.

This Facilitator is Also a Queen

There are many biblical references of Mary being queen mother and mother of the King.

At the Annunciation and Visitation, Gabriel appeared to a virgin betrothed to a man “of the house of David” (1:27). Then Gabriel tells Mary, “And behold, you will conceive in your womb and bear a son, and you shall call his name Jesus. He will be great, and will be called Son of the Most High; and the Lord God will give to him the throne of his father David, and he will reign over the house of Jacob forever; and of his kingdom there will be no end” (Luke 1:31–33). Mary is the mother of the king.

Elizabeth welcomes Mary into her home with the title “the mother of my Lord” (Luke 1:43). This title given to Mary has royal significance. In the royal courts of ancient Israel and the NearEast, “Mother of my Lord” addressed the queen mother of the reigning king (who himself was addressed as “my Lord”; cf., 2 Sam. 24:21). Elizabeth, filled with the spirit of God, is relaying the heavenly and earthly role as the royal mother of the King Jesus whose kingdom will have no end.

Finally, Mary’s queenship was seen by John with his vision in Revelation 12: “And a great portent appeared in heaven, a woman clothed with the sun, with the moon under her feet, and on her head a crown of twelve stars; she was with child and she cried out in her pangs of birth, in anguish for delivery” (Rev. 12:1–2)

Mary, the mother of Jesus is also our heavenly mother. She was given to us when Jesus was hanging on the cross. John 19:26–27  When Jesus saw his mother and the disciple whom he loved standing nearby, he said to his mother, “Woman, behold, your son!” 27 Then he said to the disciple, “Behold, your mother!” And from that hour the disciple took her into his own home and Mary became mother to not just John but all of humanity.

In 1950, Pope Pius XII officially announced the Assumption of Mary to heaven a dogma of the Catholic Church, ”The Immaculate Mother of God, the ever-virgin Mary, having completed the course of her earthly life, was assumed body and soul into heaven.”

This Queen is Also a Messenger

But Mary is not only Queen of Heaven. She has countless times appeared here on earth as a messenger of hope and also of warnings. The visionaries describe a beautiful heavenly woman delivering important messages and prophecies from her son the Prince of Peace. The Holy See has officially approved at least 13 apparitions of the Blessed Virgin, including those at Guadalupe (Mexico), Saint-Étienne-le-Laus, Paris (Rue du Bac, Miraculous Medal), La Salette (France), Lourdes (France), Fatima (Portugal), Pontmain, Beauraing, and Banneux.

What are the messages from this heavenly queen? Throughout history, Mary's messages vary depending on what is happening in the world but the one common thread to all her communication is the Gospel and her messages are always consistent with Church doctrine. She asks us to pray, implores us to conversion, educates us on the importance of penance, fasting and reading the Bible. This mother wants to connect us to her son and our Savior. During these visits there are also miracles, healings and cures but these are not the central purpose. The central purpose is always asking her children to embrace and love her son and our Savior.

This Messenger is Also Hope for the Sinner

But this is not the end of it. Mary is not only a facilitator, a queen, and a messenger from heaven, but she is the hope for the wretched. When we sin so greatly, when we turn from God and run to a life of sin and realize we are lost, Mary is our hope. When we can’t forgive ourselves or when we can’t see how God can forgive us, we must then turn to Mary as our advocate and intercessor. There is no sin too great for Mary to assist us. She is our mother, not our judge.

The Glories of Mary by Saint Alphonsus De Liguori (Pg. 105-106) reports a story of terrible sin, offense, and forgiveness through the intercession of Mary. This story is taken word for word from the above book and is an example of the power of Mary as Hope for the Wretched.

Eutychian, Patriarch of Constantinople, relates the following well known story of Theophilus. The Patriarch was an eye-witness of the fact which we here relate, and this was confirmed by St. Peter Damian, St. Bernard, St. Bonaventure, St. Antoninus, and others.

Theophilus was Archdeacon of the Church of Adanas, a city of Cilicia; he was so much esteemed that the people wished him to become their bishop. His humility prevented his consent. Some malicious people afterwards accused him, and he was deposed from his office. This afflicted him so much, that he was blinded by passion and went to a Jewish magician who induced him to apply to Satan for help in his misfortunes. The devil answered that if he wished his assistance, he must renounce Jesus and Mary his mother and hand over the act of renunciation, written with his own hand. Theophilus executed the vile document. On the following day, the bishop having heard of the wrong done him by his calumniators asked for his forgiveness, and restored him to office.

Theophilus began to feel so tortured by remorse of conscience on account of the great crime he had committed that he wept continually. What does he do? He enters a church, prostrates himself in tears before an alter of the blessed Virgin, and exclaims, “Oh mother of God, I will not despair having thee, who art so merciful, to aid me.” He persevered forty days in weeping and praying thus to the holy Virgin; when behold, one night the mother of mercy appeared to him and said, "Oh Theophilus, what have you done? You have renounced my friendship and that of my Son; and for whom? For your own and my enemy.” “Oh Lady,” answered Theophilus, “it belongs to thee to pardon me, and to obtain my pardon from thy Son.” Then Mary, seeing his confidence, answered, “Take courage, and I will pray for thee.”

Theophilus, encouraged by these words, redoubled his tears, his penance, and his prayers, remaining constantly at the foot of the altar. And, behold, Mary appeared to him again, and with a joyful countenance said to him, Theophilus, rejoice, I have presented thy tears and thy prayers to God; he hath accepted them and hath already pardoned thee; henceforth be grateful and faithful.” “Oh Lady,” replied Theophilus, “this is not sufficient to consult me; the enemy still holds that impious deed, by which I have renounced thee and thy Son; thou canst obtain it for me.” After three days, Theophilus awoke one night and found the paper on his breast.

The next day, when the bishop with a large assembly were present in the church, Theophilus cast himself at his feet, related the whole story, and gave the bishop the infamous writing. The bishop immediately ordered it to be burned in the presence of all the people. The people wept for joy and praised the goodness of God, and the mercy of Mary towards this miserable sinner. Theophilus returned to the church of the Virgin. Three days later, he died happily with thanksgivings to Jesus and his holy mother on his lips.

God the Father gave His only son to Mary. She carried Jesus in her womb, delivered him into this world and raised Him for thirty years privately. She nurtured him in His faith and taught Him everything He needed to know before starting His ministry.

She was with him during his ministry, trial and death sentence. She was on the road to Calvary. She was at the foot of the cross and held Jesus in her arms when his dead body was taken off the cross. She buried Jesus and was also there at Pentecost.

If God the Father can trust Mary to do His Will down here, surely you can ask Mary to help you. She is human, lived here on earth and went through unimaginable suffering and trials. Her main purpose all along is to lead her children to Jesus Christ.

How do you start? Say one Hail Mary a day or do a rosary once a week. Ask her to help you. You will not be disappointed.